Sunset Industrial Parts is a power transmission parts and hose distributor with over 25 years of history. They represent the finest manufacturers and carry the largest local inventory in the industry.

James Stratmann is the president and CEO of Sunset Industrial. James rowed on the crew team at Syracuse and then successfully managed sales teams at ADP and Oracle. When he took over the family business in 2014, James immediately noticed how their sales process was very disorganized.

He saw room for improvement in two main areas:

James transformed this disorganized sales process into a revenue-generating machine with Badger Maps.

"My new sales hire tried Badger and said, "This is the best tool I’ve ever used, I can’t believe everyone in sales isn’t using it.”

How to Fix a Disorganized Sales Process

Optimizing Time in the Field

One of James’s responsibilities was to create daily sales routes for his team. He would spend up to 2 hours a day creating routes that best fit each member of the sales team. Each rep had 5-10 regions to cover and were tracking their individual sales activity with paper notes and spreadsheets. There was no reliable way to prioritize accounts when each rep was tracking their customers in separate programs. The team had no clear way of seeing where they should spend their time and this hurt productivity.

James made sales routes from spreadsheets of his customers.  Using spreadsheets was a tedious process, as he had to search through rows and rows of customers to find the right clients and leads for the day. Routes created this way resulted in lost time because they weren’t the fastest or most optimized.

Tracking results by hand is time-consuming and risky.  At the end of each day, it would take James an hour to log all sales activity into spreadsheets. He’d have to look through his sales reps’ notes from notepads, documents, and computers all while running the risk of misplacing important information.

Each sales rep had their own separate technique for deal tracking and note taking, so it was difficult for James to to gauge team progress and forecast future sales. This affected onboarding because it was difficult to track how new hires were doing in the field, making it hard to know where new hires could improve.

James was consumed with the threat of stalled business growth, so he needed to find a solution for Sunset Industrial. He looked at different routing software but none of them lived up to his standard. What he needed was something that created customer routes based on both priority level and the status of the account. Additionally (and crucially), he needed these routes to be optimized.

"Before Badger, we were losing 2 hours a day to territory planning and reporting results. Now our routes take 5 minutes and directly link to activity. Badger has certainly improved productivity." 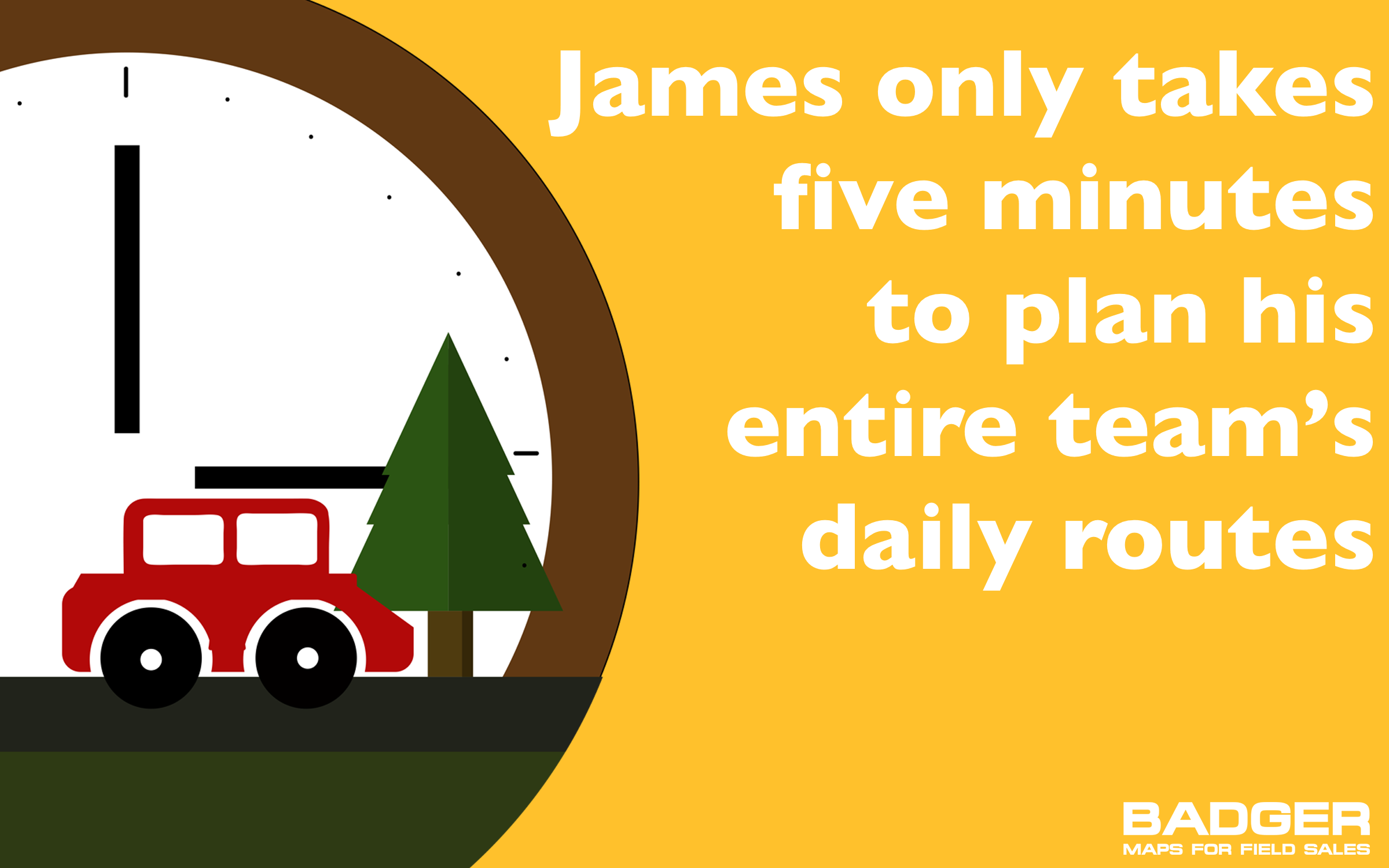 James worked with his dedicated Badger account manager to upload all their customer data into Badger and were able to see all their customer locations on a map. His account manager made sure that the data uploaded was up to James’ standard and worked best for his team. With all the guesswork removed, route creation has become much easier. James now knows exactly which customers and prospects are near each other and could filter accounts based on priority level.

Using Badger’s Lasso Tool, James can create a route in seconds. Before Badger, route creation was a was a daily two hour process and consisted of switching constantly between spreadsheets and Google Maps. With Badger, planning the entire team’s daily routes only takes 5 minutes without having to use multiple programs.

The sales team uses Badger’s Custom Check-ins to take notes for each customer and prospect meeting they have. The team logs notes once from the field and check-ins are automatically generated into a report and sent to James via email. These check-in reports make it easy for James to quickly recap how the team’s meetings are going during the week. He no longer has to update their customer database from his reps’ notes and these check-ins have improved his ability to measure team performance. 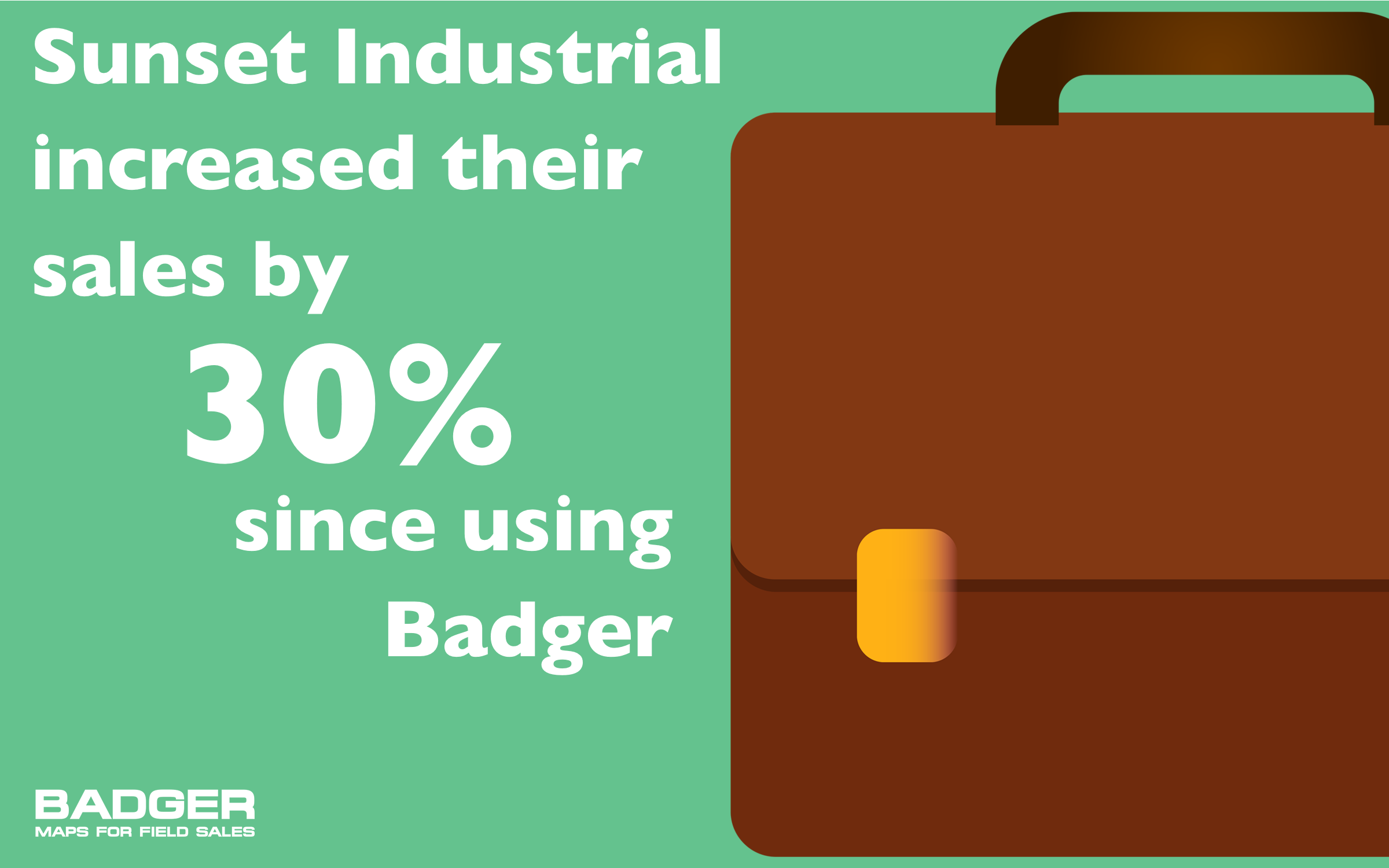 Since using Badger, Sunset Industrial increased selling time by 8 hours a week per rep and increased sales by 30%. They can now easily track revenue and consistently prioritize important clients.

James and the Sunset Industrial team worked closely with their dedicated account manager to ensure success. The team’s willingness to learn and Badger’s intuitive app meant that the team was fully trained quickly. With round-the-clock consulting from Badger’s support professionals, James was able to successfully integrate the application into his team’s daily routine.

Badger made it possible for the Sunset Industrial team to see all their customer data in one place and filter by account priority level. This enables them to make the fastest routes to their best customers in minutes. Being able to take notes about customer meetings directly in the Badger app meant that James was able to keep track of his team’s activity with a single click and know exactly what was happening in the field.

The team cut out wasted time spent meticulously creating routes and logging meeting notes into their customer database. This allowed reps more time to meet with customers/prospects and lead to increased sales with customer data at their fingertips.

Now James can focus on improving his team’s performance and sales strategy as he continues to grow Sunset Industrial.

How Danaher Increased CRM Usage by 50%